One of my goals with the recipes I create here on the Sinkology blog is to share simple recipes that have a big impact at your dinner table. Truthfully, instant and pre-made certainly have their place in the kitchen but sometimes you just need a little something special. Homemade cream pie is one of those recipes that requires a few special steps – but with that first bite you’ll realize, those extra minutes were so very worth it! 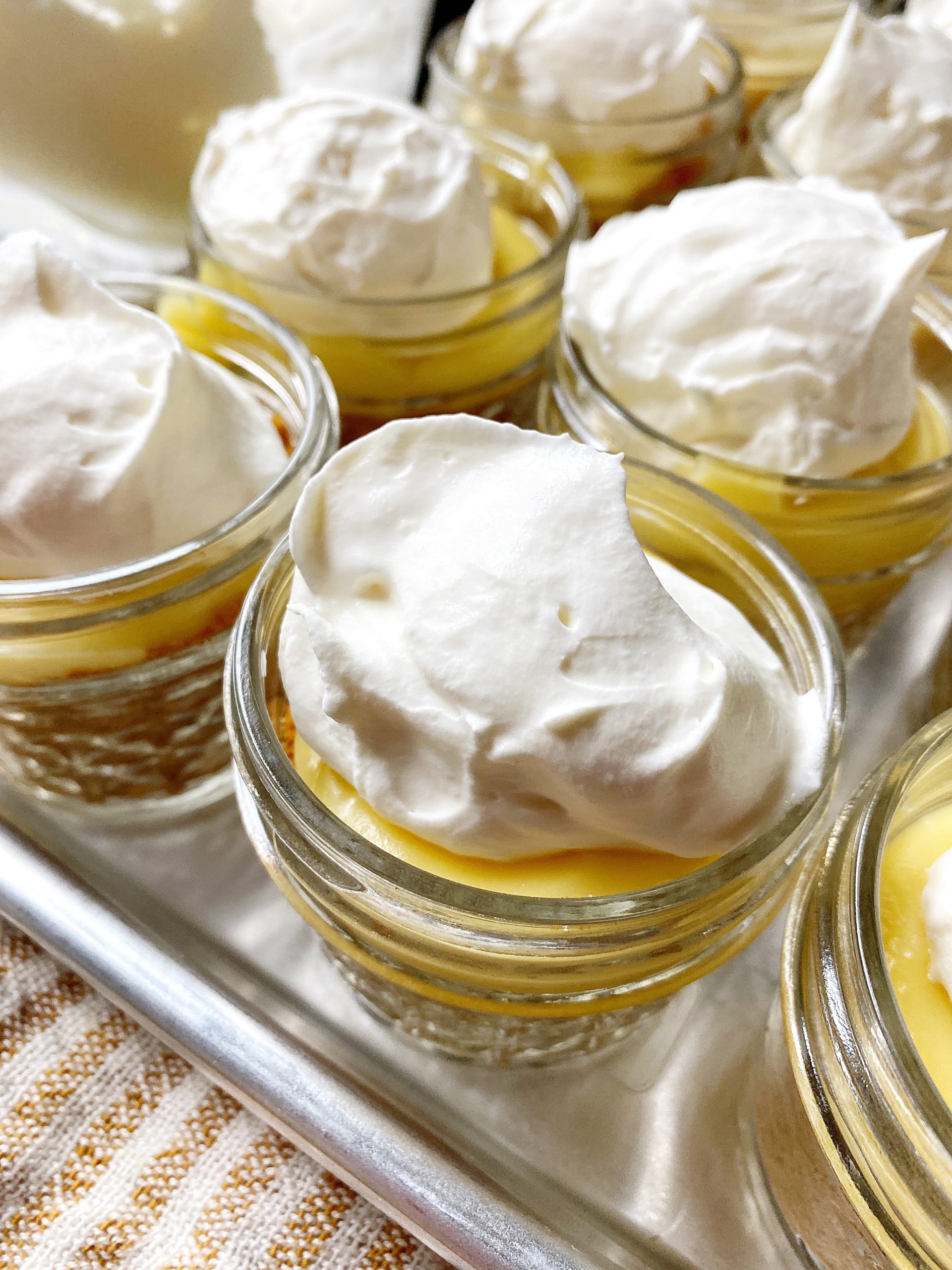 Yes, there are a few more steps required to prepare a homemade cream pie filling – but the technique is simple and the process is surprisingly speedy.

I’ve broken the process down into to categories – crust and filling. 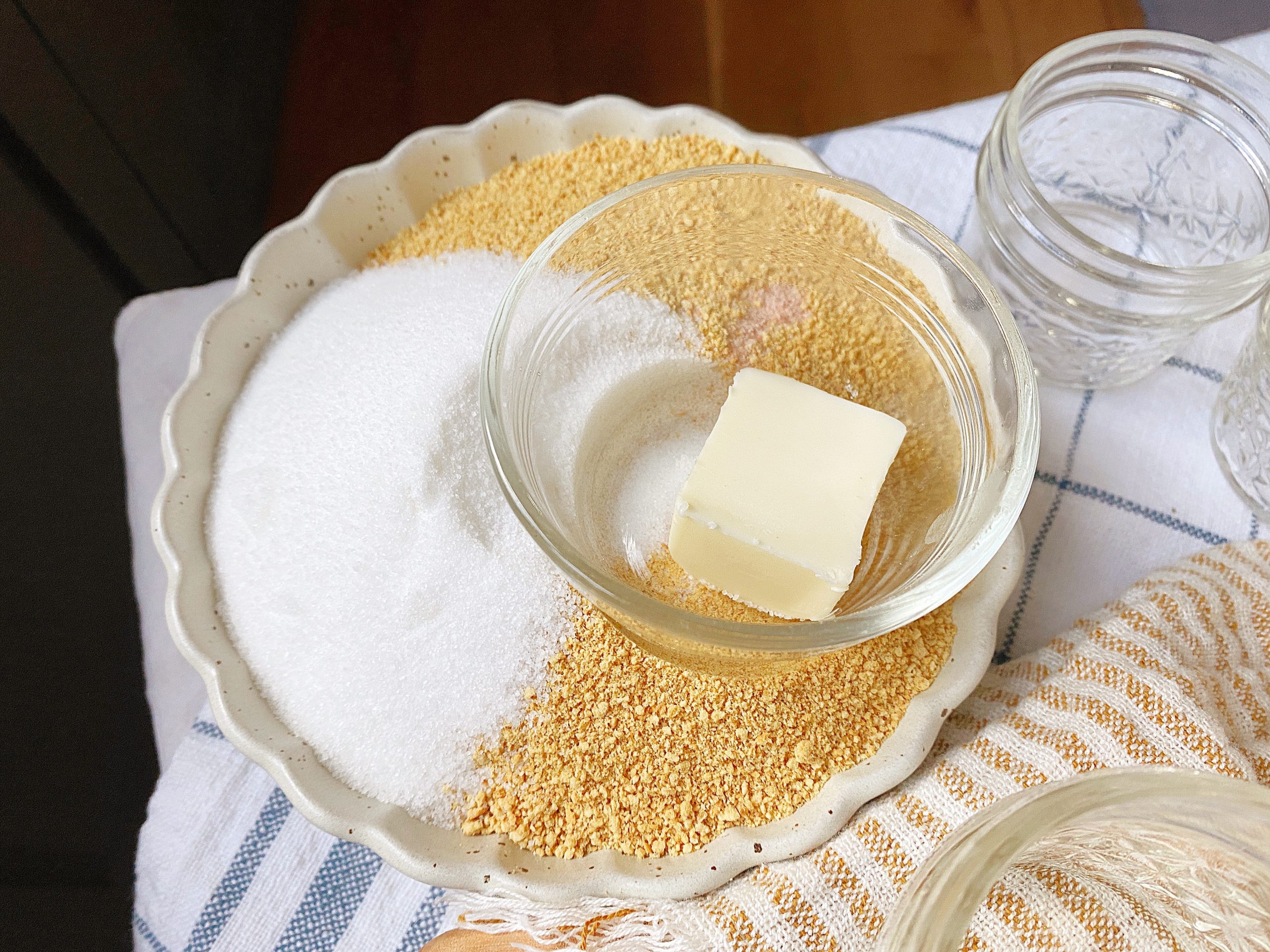 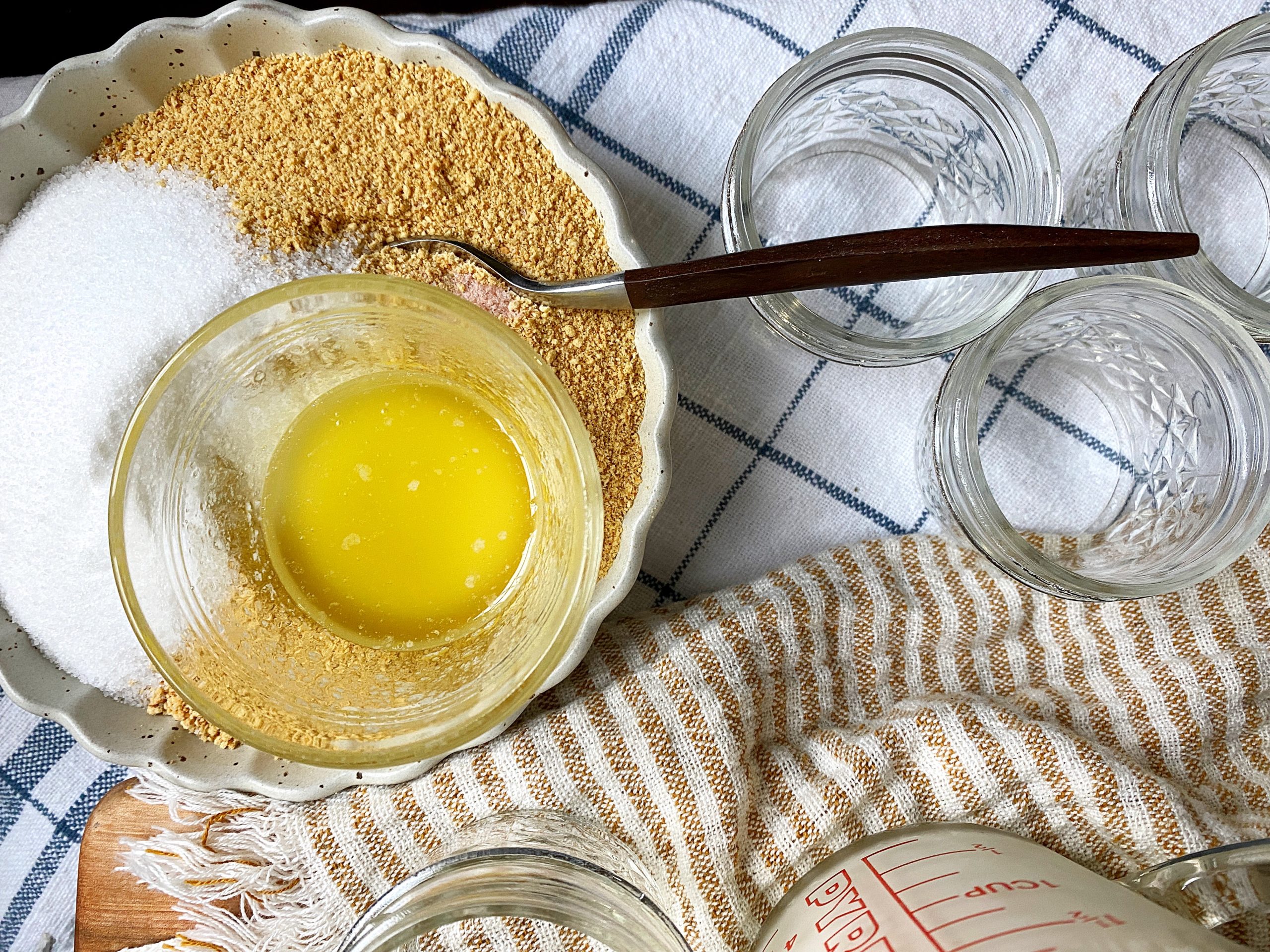 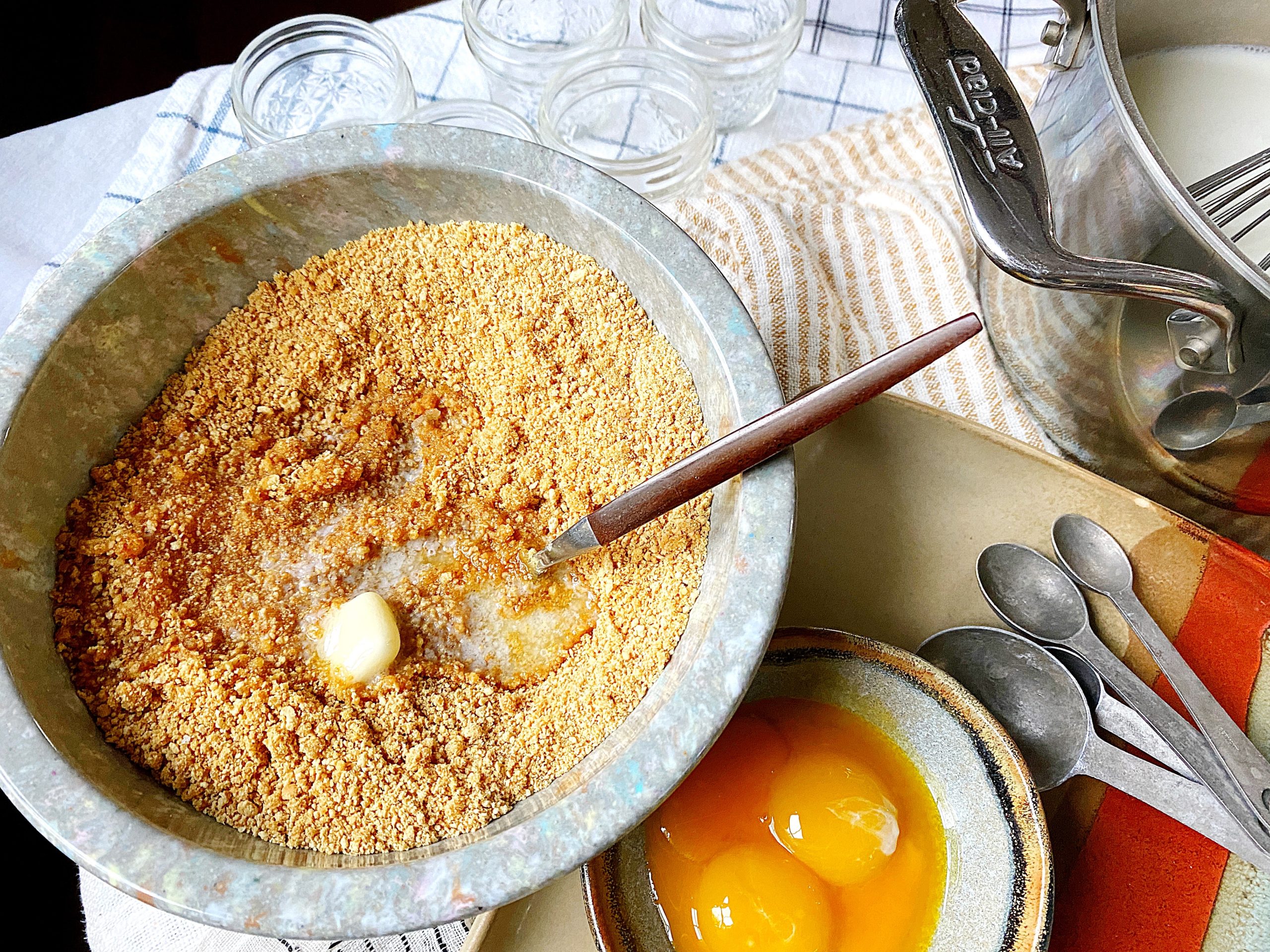 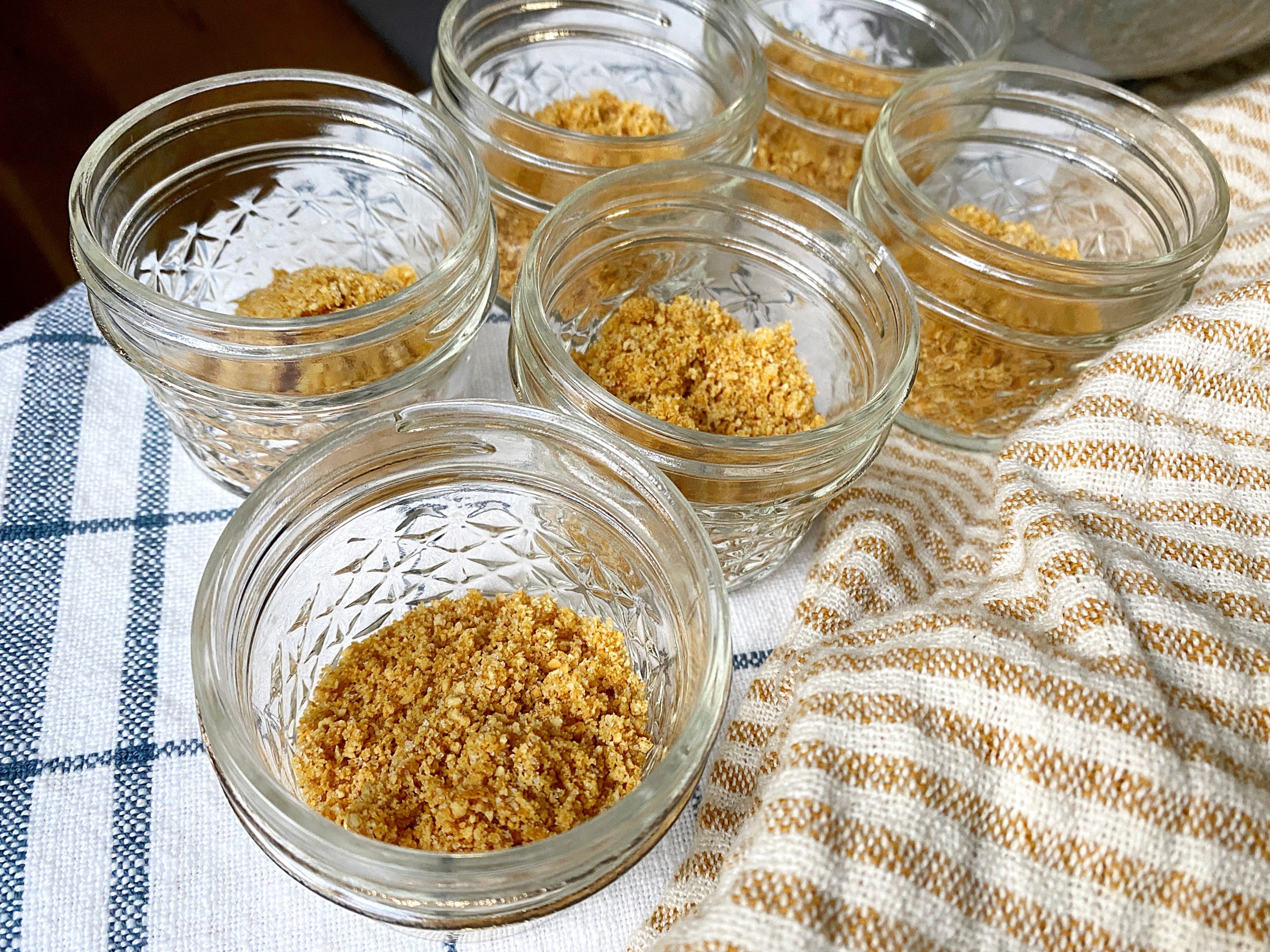 This graham cracker crust is the easiest thing ever! Simply buy boxed graham cracker crumbs, combine them with melted butter, a pinch of salt and some sugar and then press the crust mixture into the bottom of each jar.

I like to bake the crust-filled jars at 350° for 10 minutes so that the crust forms a crisp shell to hold the cream pie filling. 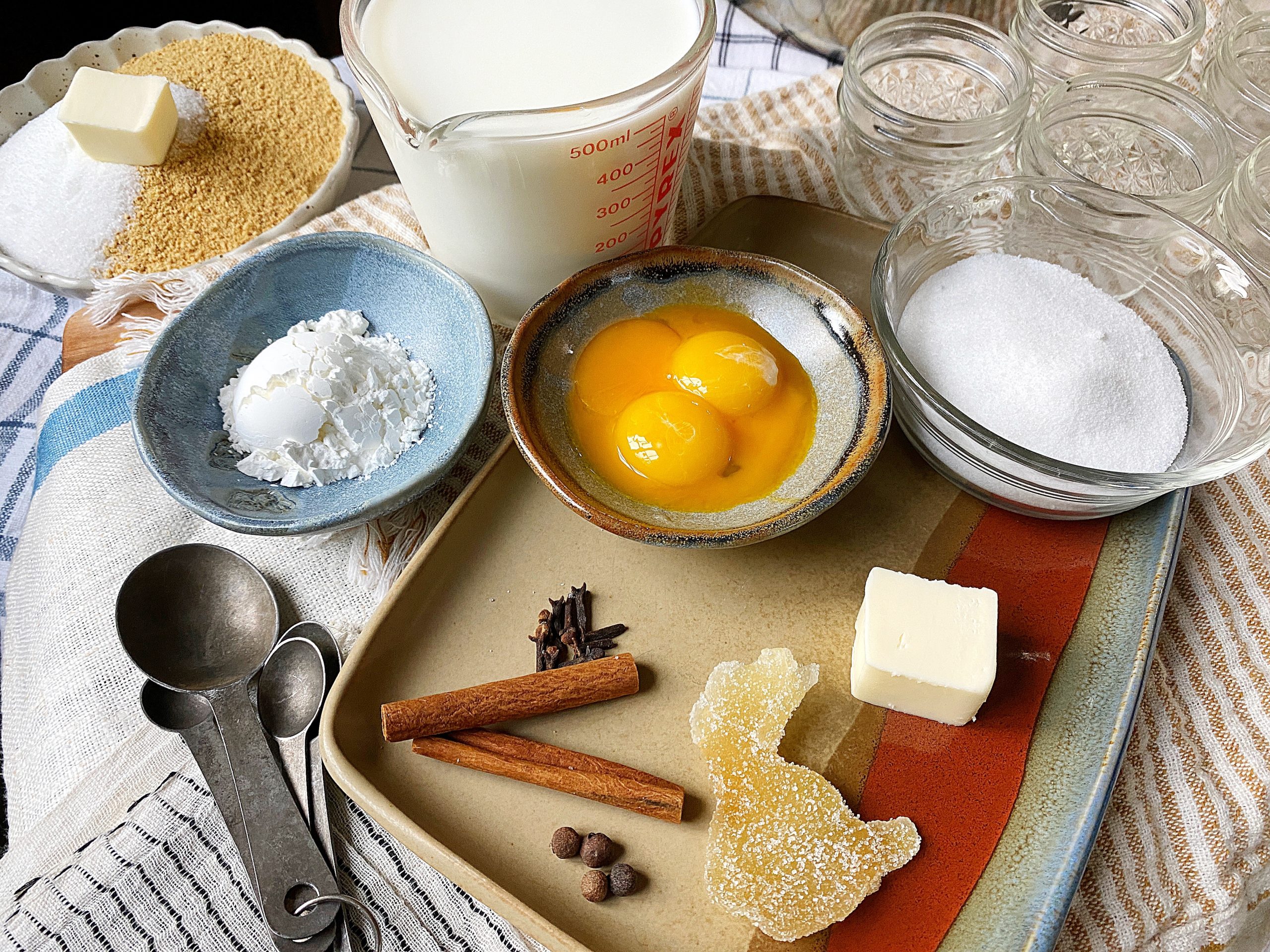 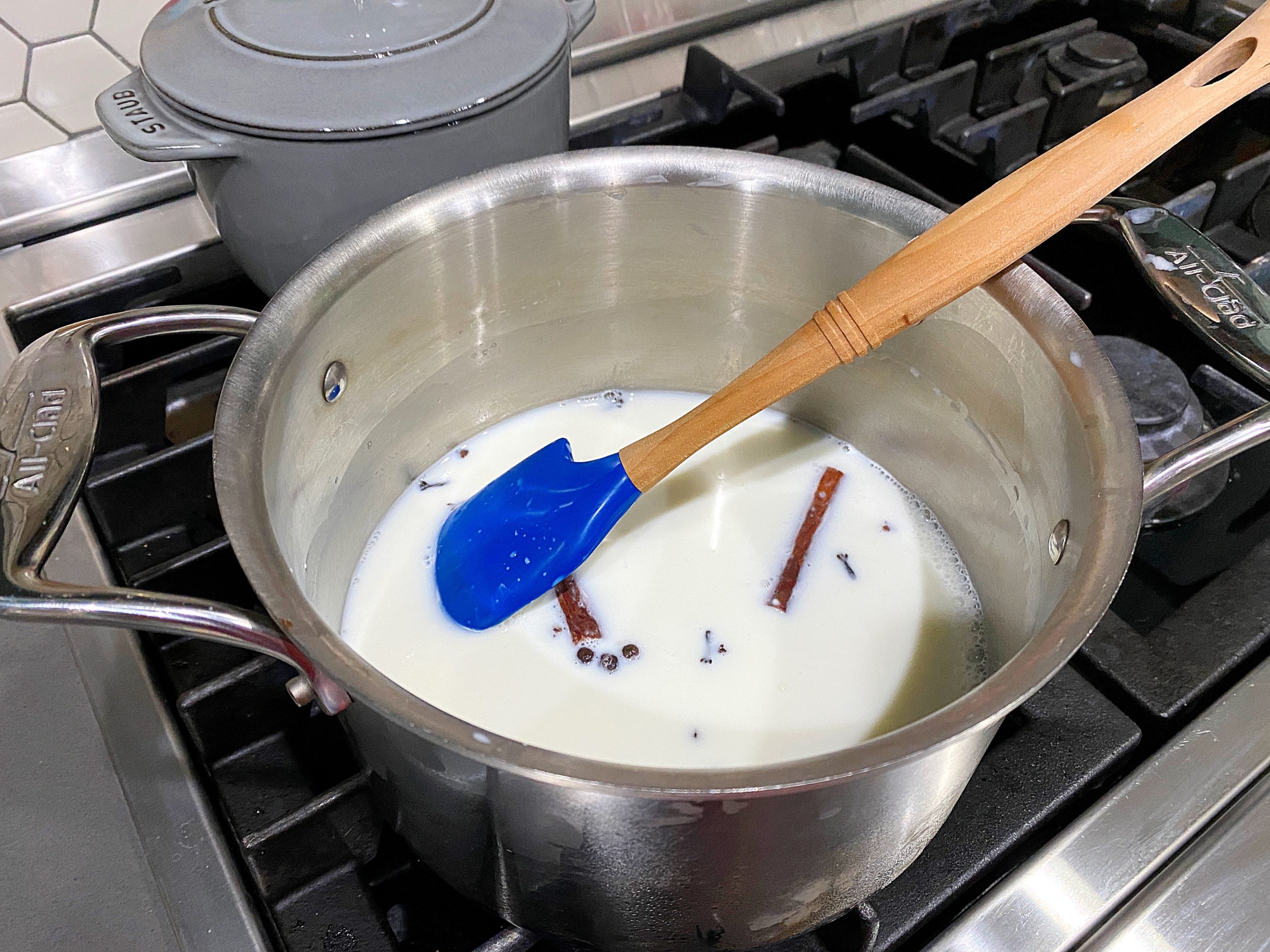 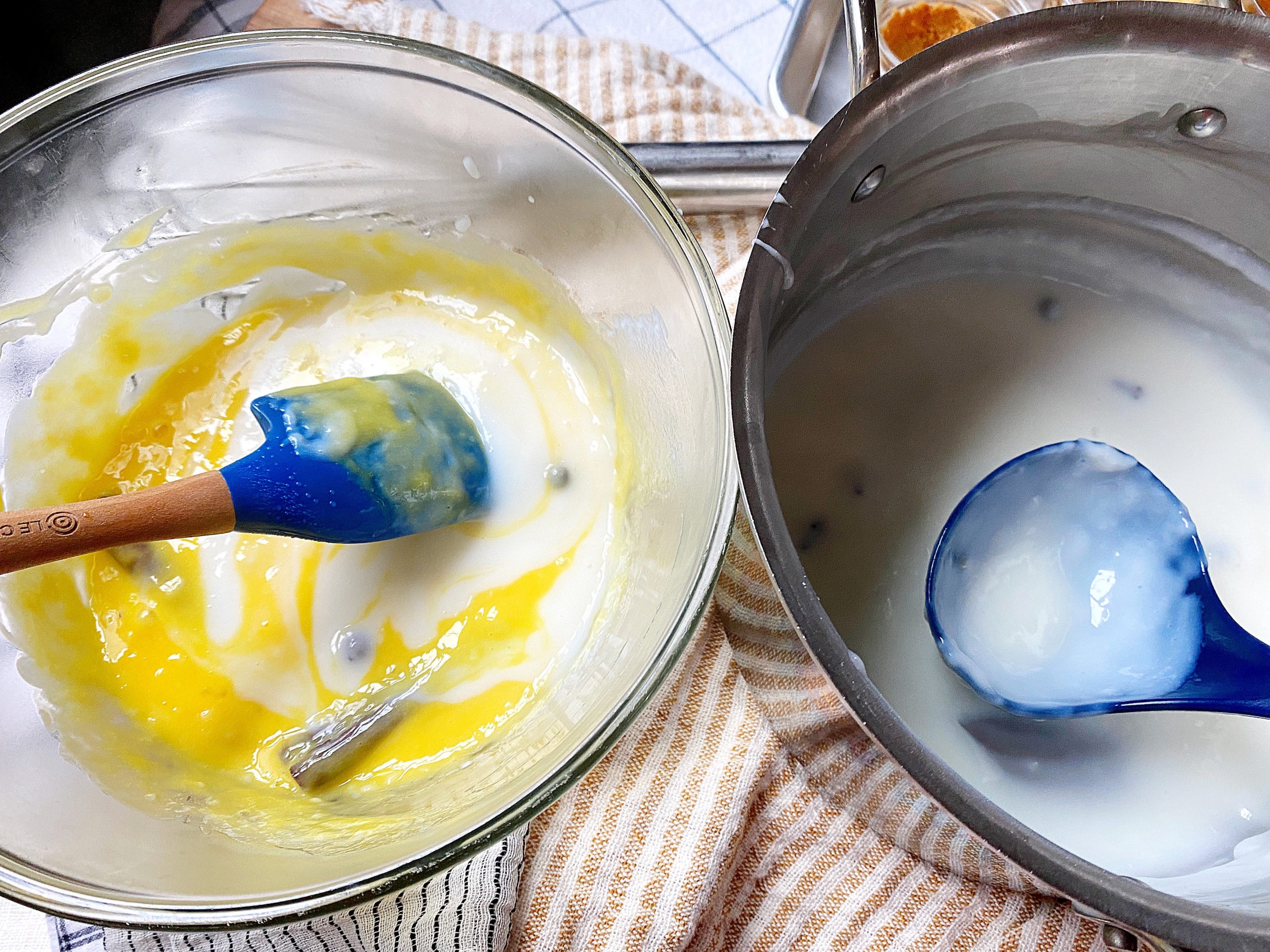 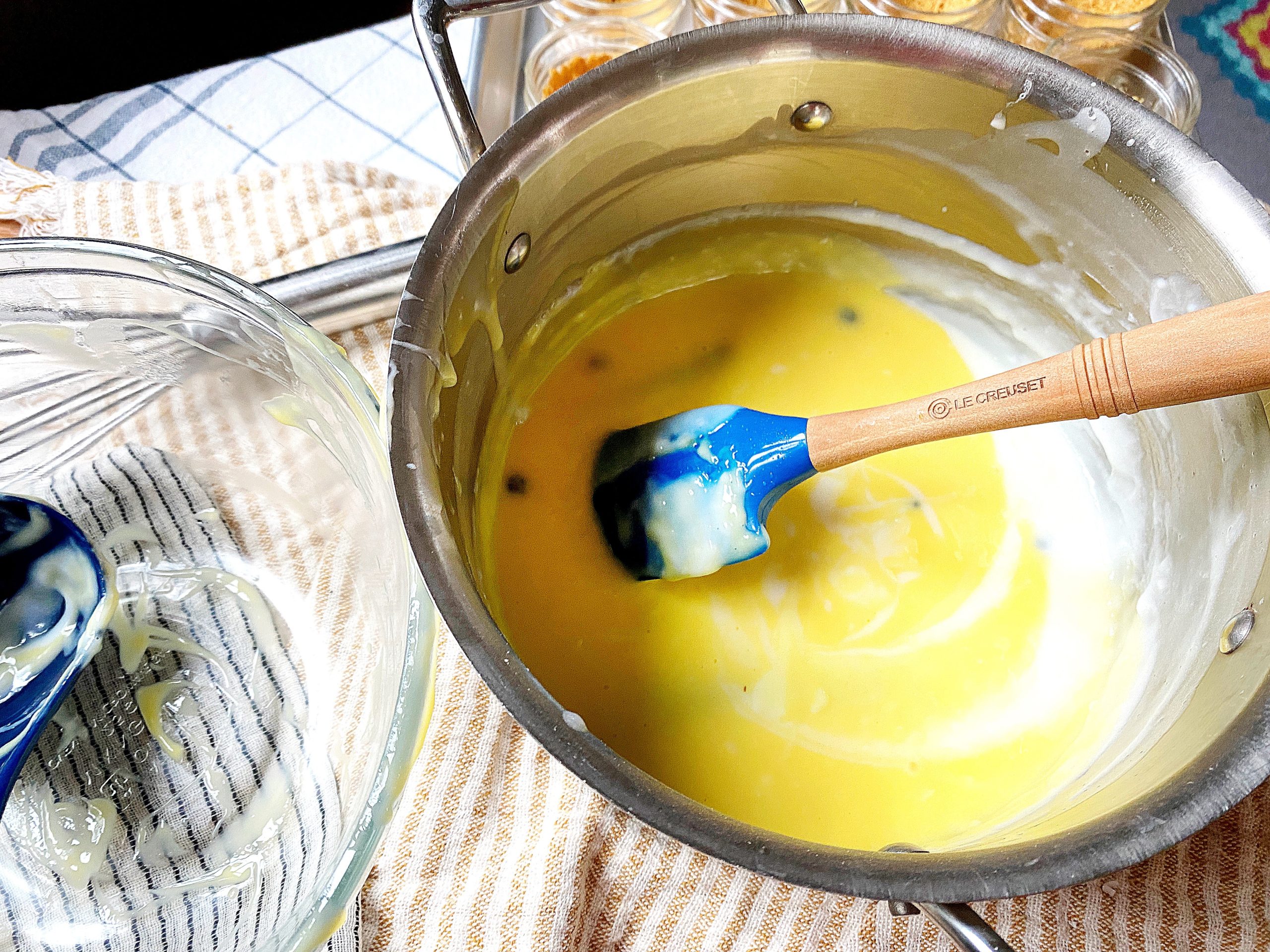 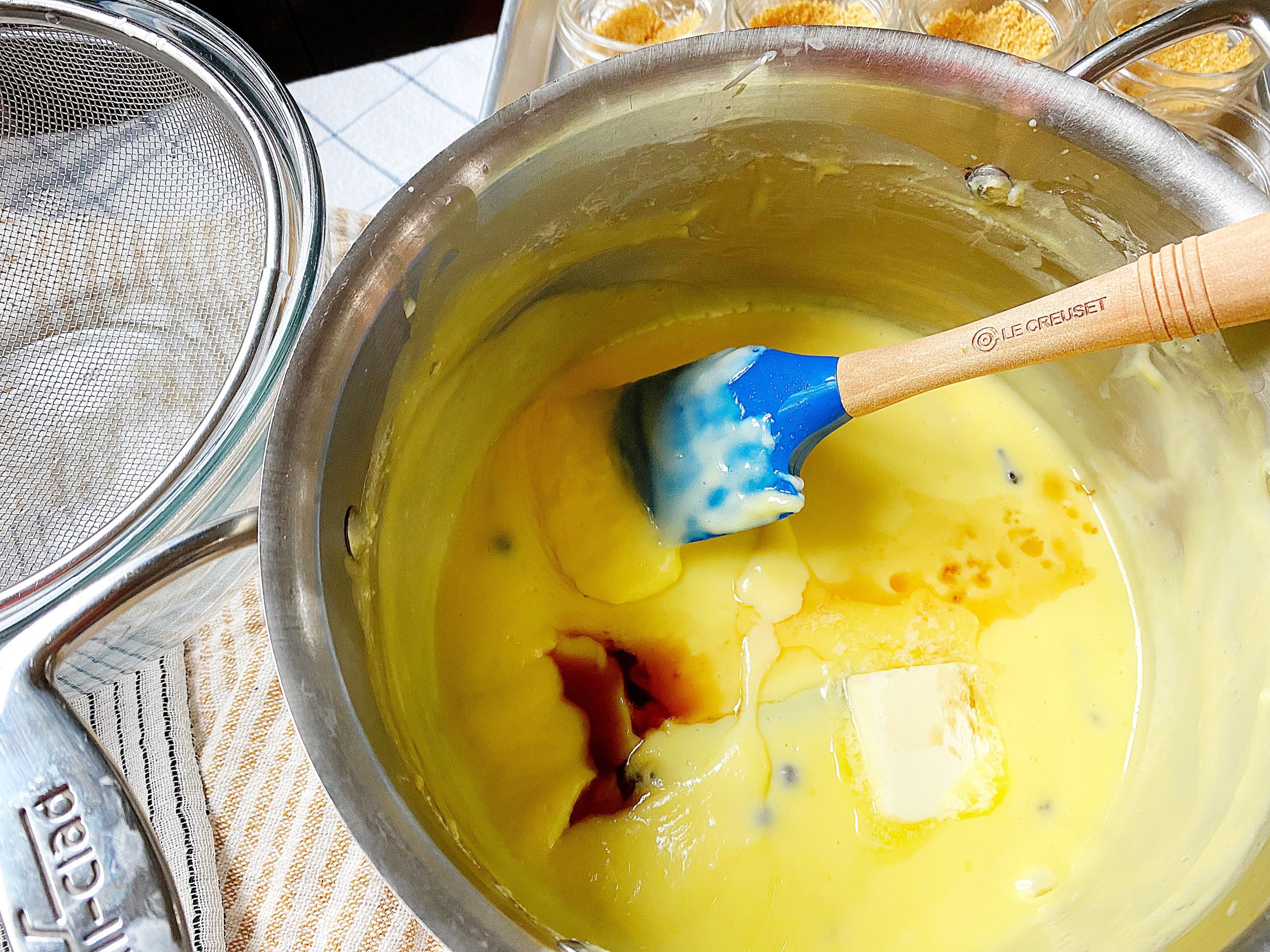 Preparing the spiced vanilla cream pie filling is where a few important techniques come into play. But these really are a few basic kitchen skills that are handy to be familiar with.

First, prepare the crust, fill the mini pie jars and bake them. The crusts should cooling when you begin making the cream pie filling

Next, measure everything out and separate the egg yolks:

Now you’re ready for the speedy process of making homemade pie filling. Start by combining the cornstarch, sugar and milk in a medium saucepan. Add the spices and place the saucepan over medium/medium-low flame and stir continuously.

Once the filling has thickened and boiled for 1 minute, pour half into the whisked eggs. It’s important to stir the egg mixture continuously during this process.

Return the egg mixture to the saucepan, and boil the filling for one minute while continuously stirring.

All that’s left is to strain the mixture and then fill the mini pie crusts. 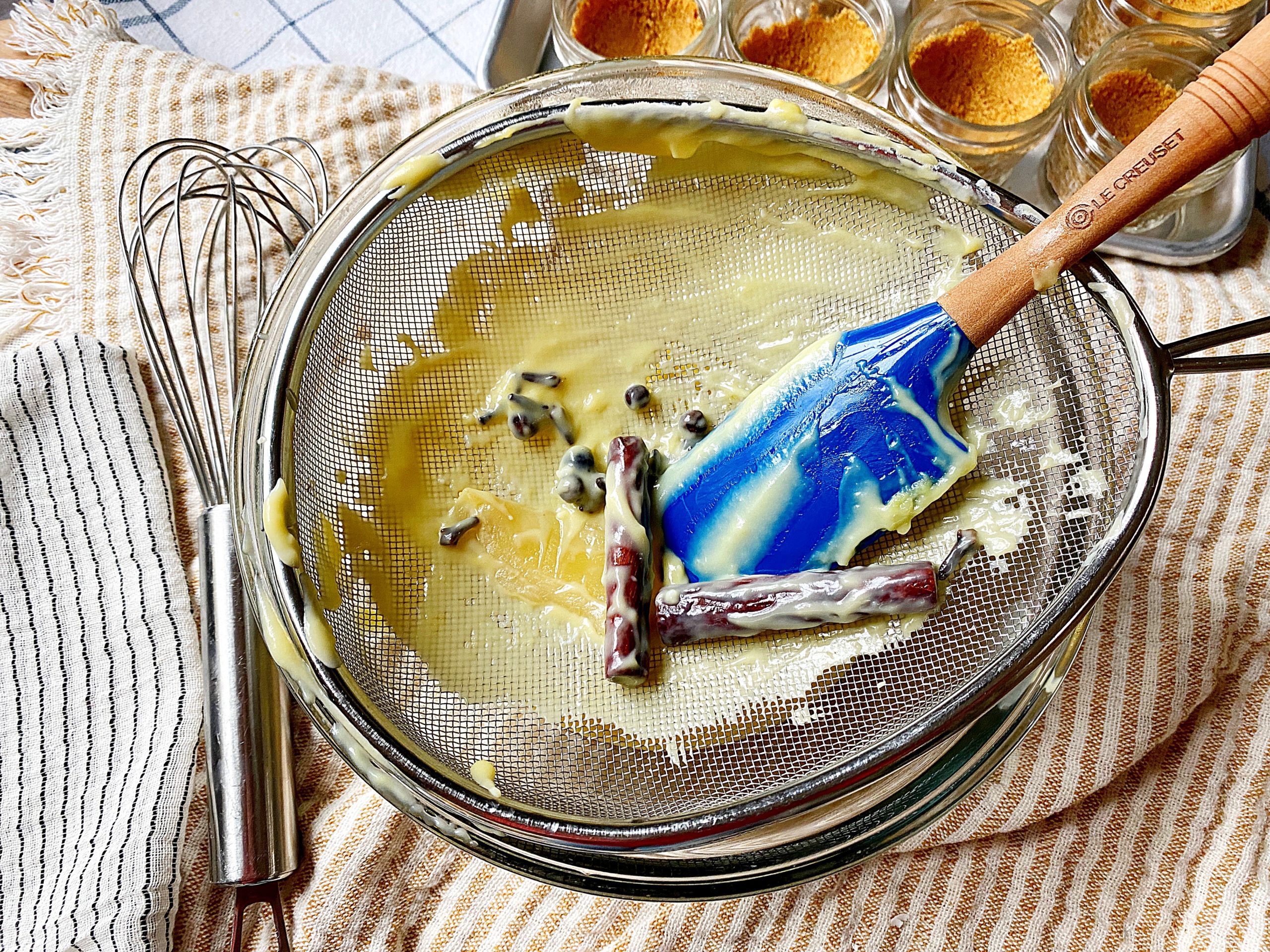 Chill and serve with a dollop of sweetened whipped cream and a sprinkle of ground cinnamon. 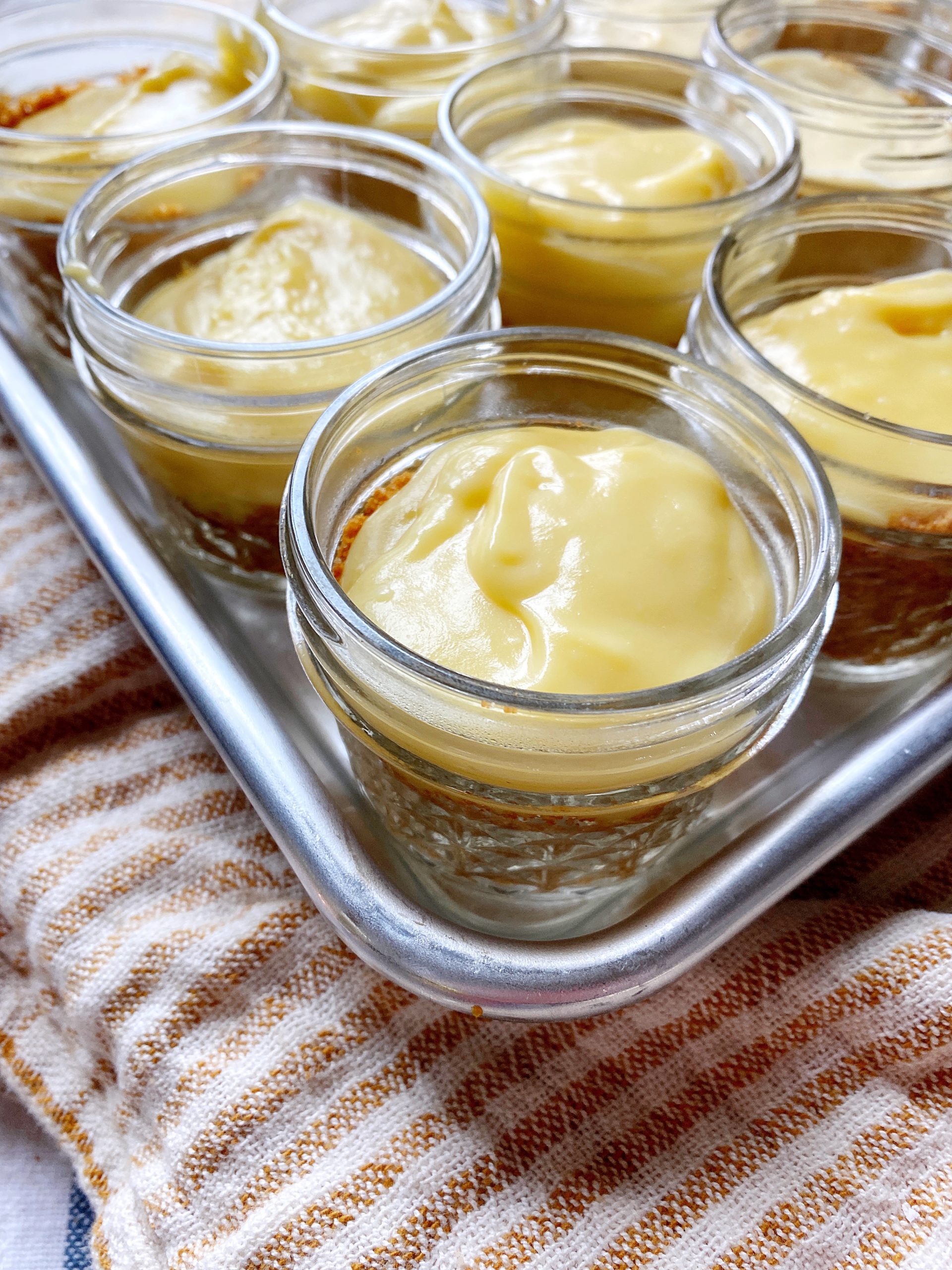 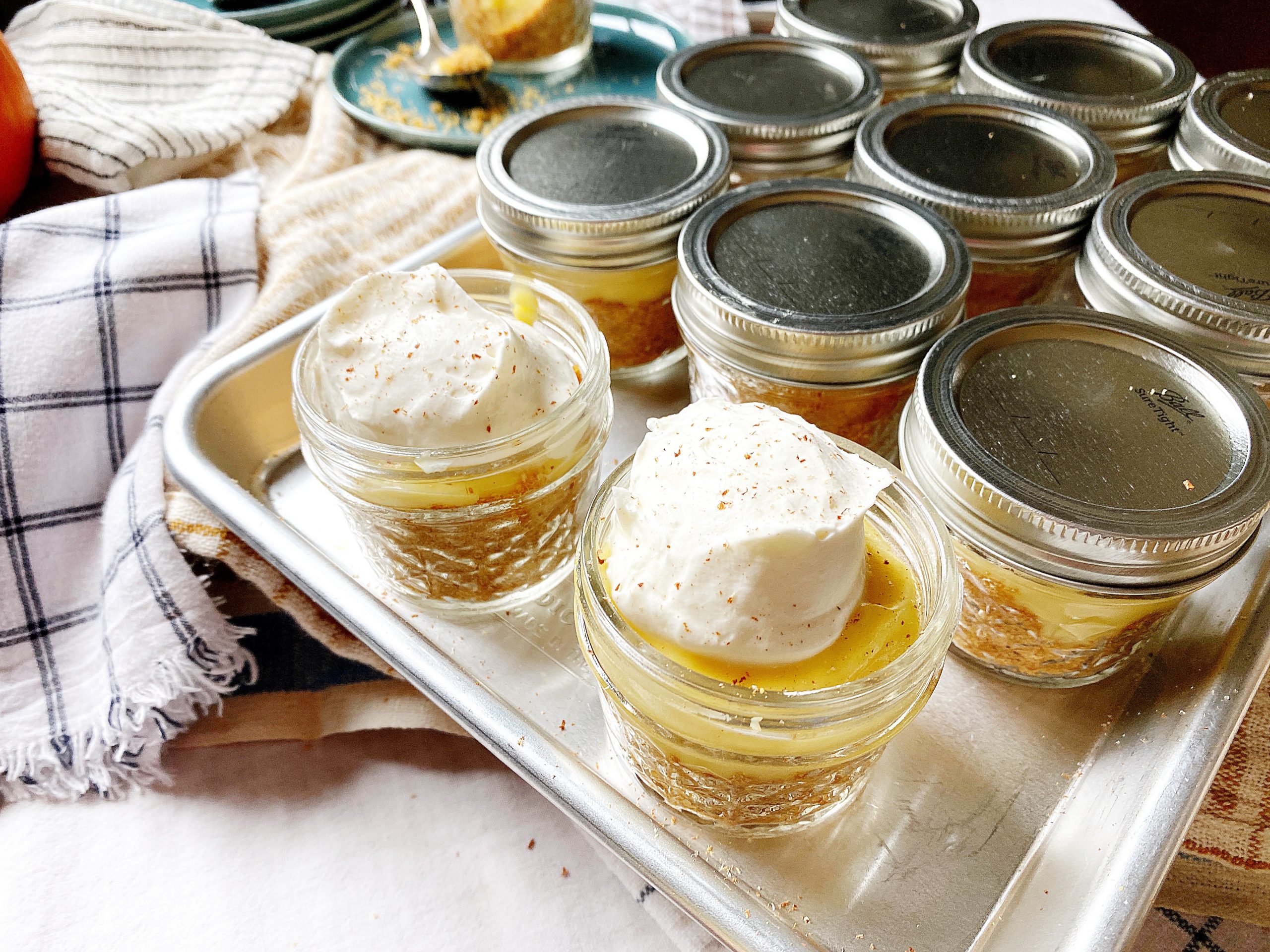 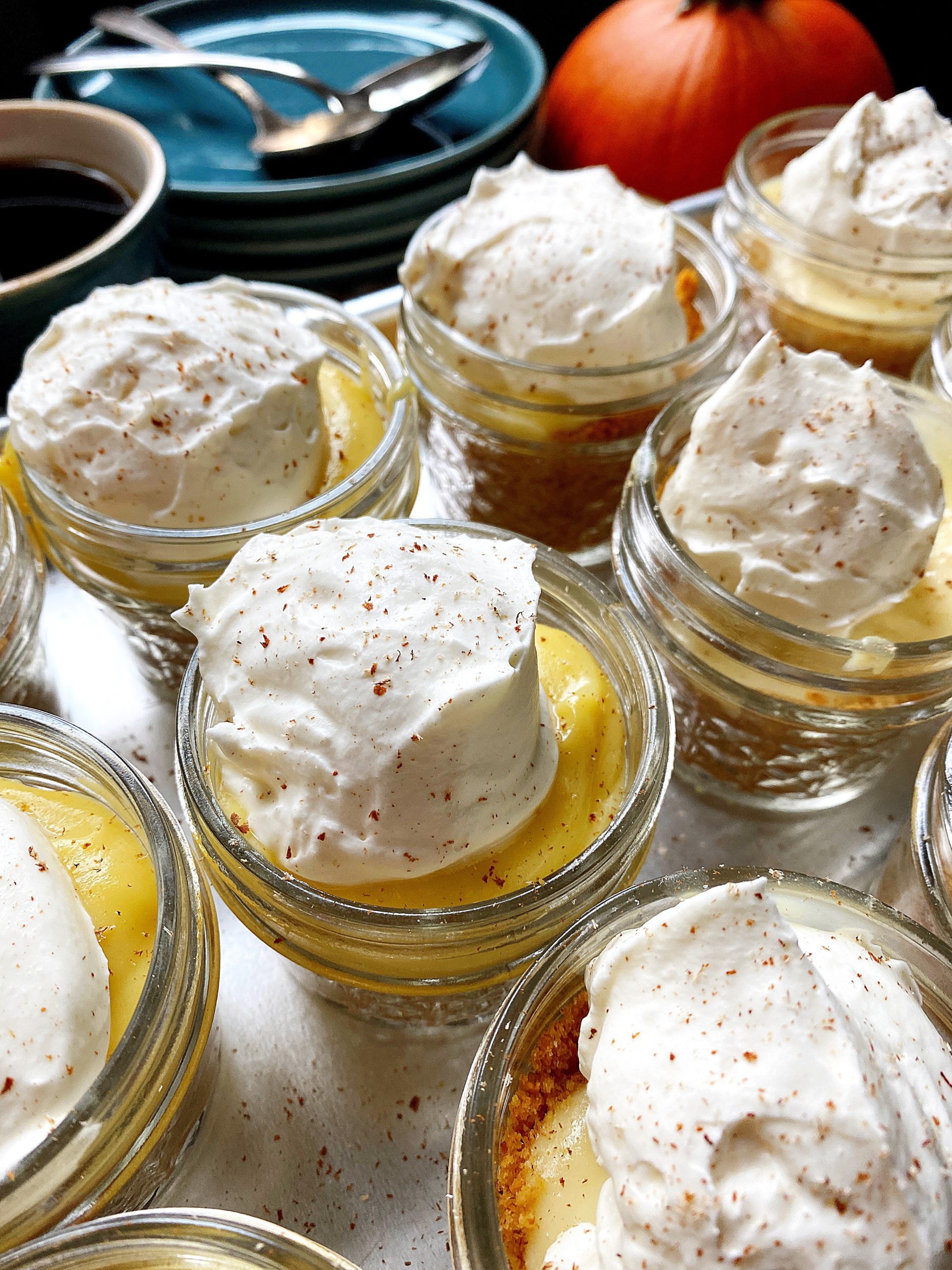 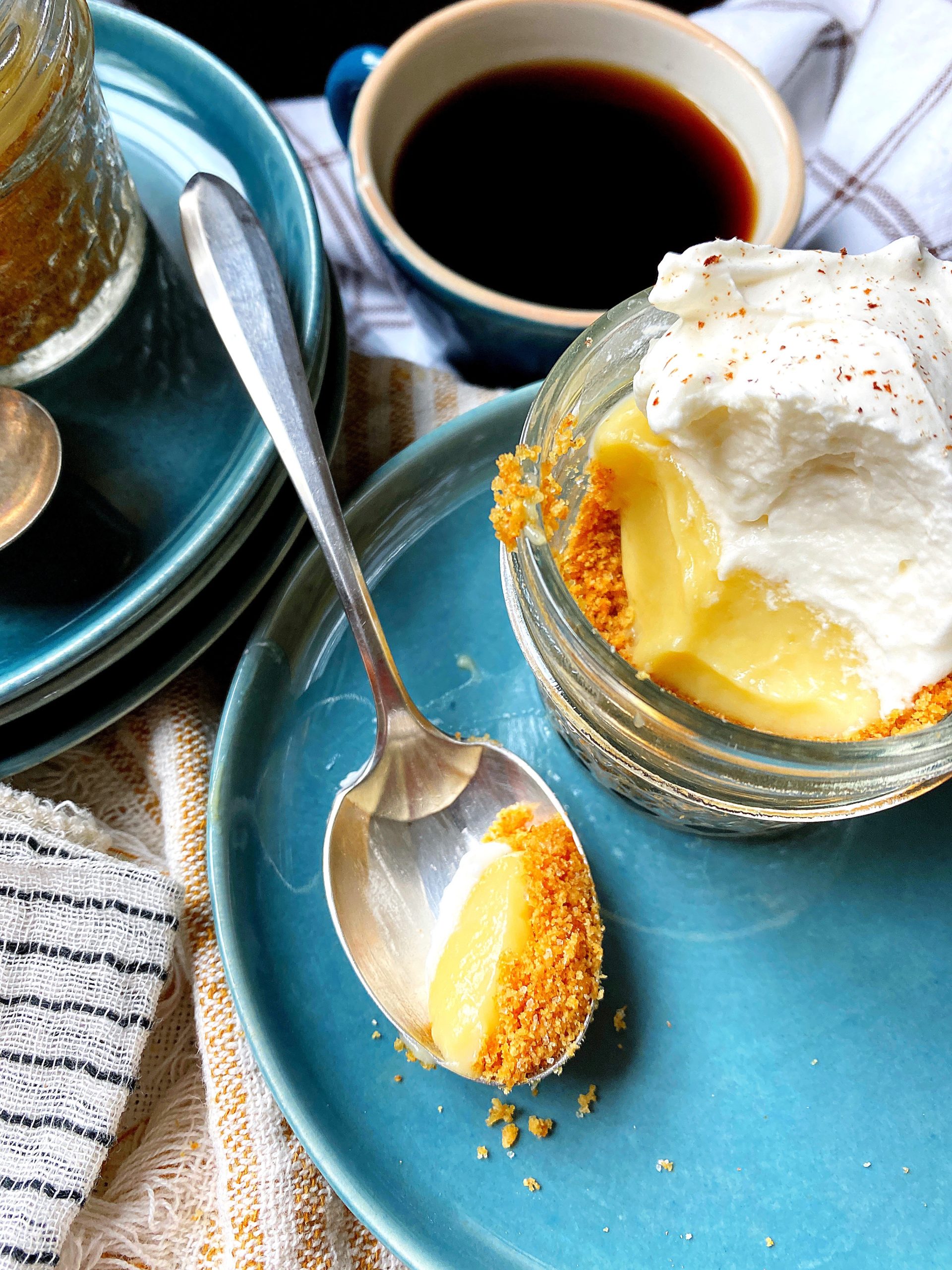 I love this dessert for so many reasons.

First, it’s easier to make than it sounds – so that’s a relief! Second, it’s so, so much better than instant pie filling. Third, the spiced flavors are so perfect – just the right amount to taste festive and warm without overpowering the vanilla. And last, I love that this dessert can be made ahead and served as pre-portioned mini pies.

Heat the oven to 350°. Combine crust ingredients in a medium mixing bowl and press approximately 2 T of the mixture into each jar, being sure to cover the bottom of each jar moving up the sides.

Place the crust-filled jars on a rimmed baking sheet and bake for 10 minutes.

While the crusts are baking, begin preparing the cream pie filling. Place cornstarch, milk, salt, sugar and spices into a medium saucepan whisking to combine. Over medium/medium-low flame* stir constantly until the mixture thickens and boils. Boil while stirring for 1 minute.

Place whisked egg yolks into a medium-sized heat proof mixing bowl. Gradually pour half of the hot mixture into the whisked yolks while stirring the egg yolk mixture continuously. Blend the egg yolk, cream pie filling mixture back into the filling in the saucepan and return to medium/medium-low flame.

Boil for 1 minute, remove from the heat and stir in the butter and vanilla.

Place the strainer over a large heat-proof mixing bowl and then pour the spiced vanilla cream pie filling into the strainer. This will strain out the spices and remove the lumps.

Pour the warm filling into the prepared graham cracker crust filled jars leaving about 1/2″ from the top of each jar.

Cover with the lid and ring and refrigerate for up to 48 hours before serving.

Serve with sweetened whipped cream and a sprinkle of grated cinnamon stick.

*depending on your stove, you may need to increase the heat to medium. The mixture can scald quickly so keep a close eye, stirring continuously and reduce heat if necessary. 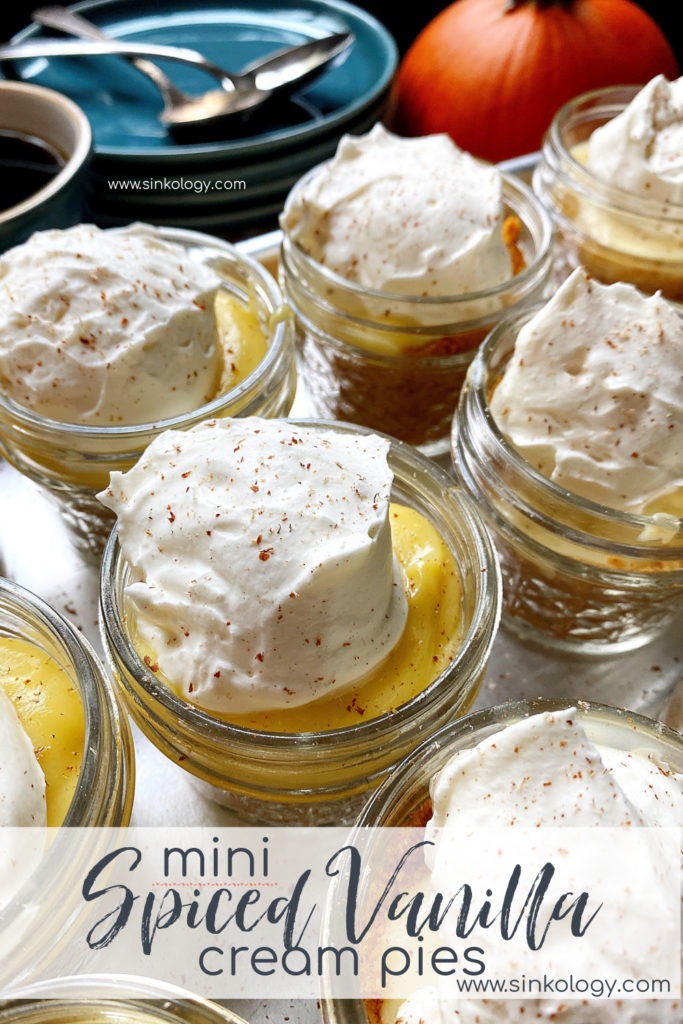 The Farmhouse Feature You Never Knew You Needed – Before & After!